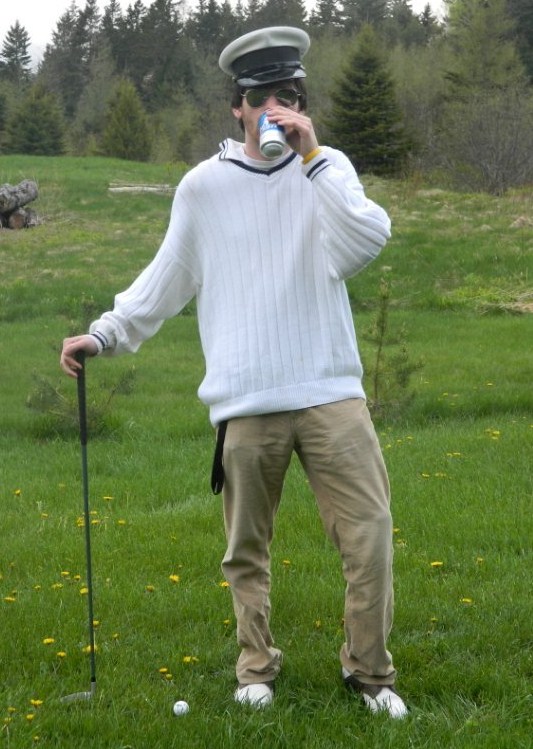 It was once said in the deepest, darkest depths of the internet that Golf is an acronym for: Gentlemen Only, Ladies Forbidden. Yeah, I looked it up for the post and it turns out some dummy started it as a joke.

I was laying in my bed thinking about how much I wanted to play golf when I thought of that phrase, which got me thinking about the blog. I want to write an entry about being a mans' man.

I started by chopping down a tree.

Okay, I didn't chop down a tree, but I cracked open a refreshing beverage... with one hand! Maybe not the manliest of man-like things but it was kind of neat.

So, now to the point. I do these things sometimes where I set a ridiculous goal that I will probably forget about in a couple weeks. But in the meantime I make a list of things I can do to reach that goal with the ultimate goal of making people laugh when I tell them about it.

Here is the first one: Become the Manliest Mans' Man.

Step 1 - Attire
For formal events (weddings, million dollar charity events, and weekend benders where you go to a casino and you think its funny to dress in formal attire), a mans' man should be at a high end, as sharp as Pierce Brosnan as James Bond, and at low end, Daniel Craig.

For casual events (bowling, opera, and standing in a driveway talking about cars), something between George Clooney in that scene in The Descendants when he is out to dinner with his kids and he talks to his cousin who is at the bar, and  Bob and Doug McKenzie.

Business causal... Still working on that.

I'm a vegetarian and that works for me. Some guys would say steak. I am not one of those guys.

Fishing: Use a pole

Hunting: Use a gun or bow and arrow or knife or your own hands or any combination of the four.

Cars advanced: Rust is bad; 5 speed good. (6 speed even better) (Anymore than 6, don't hang out with that guy)

Football: Pretend it is awesome

Golf: Use a different pole

Gym: "I've been rotating between back and chest one day and arms and gluts the next," while actually, "I do about 45 minutes on the elliptical while reading Men's Health."

Computer: Shift the conversation back to the gym

Movies: Die Hard 1, Die Hard 2, Die Hard with A Vengeance, Live Free or Die Hard, A Good Day to Die Hard, Lethal Weapon 1-4, Any Kevin Smith movie, Gigli and whatever number of Fast & Furious their on.

Home Repair: Imagine yourself as a carpenter, then call your friend who happens to be a carpenter.

If you follow the first 3 steps, then the attitude will come. If that doesn't work, then don't say a word and always look like you are thinking about something.

Well, that's it; 4 easy steps to be a Man's Man. If nothing else, have a killer smile. My best buddy, Michael Bolton, got through high school on his smile (and famous name). I am going to try my own tips out and get back to you...
Posted by Jeremy at 17:17